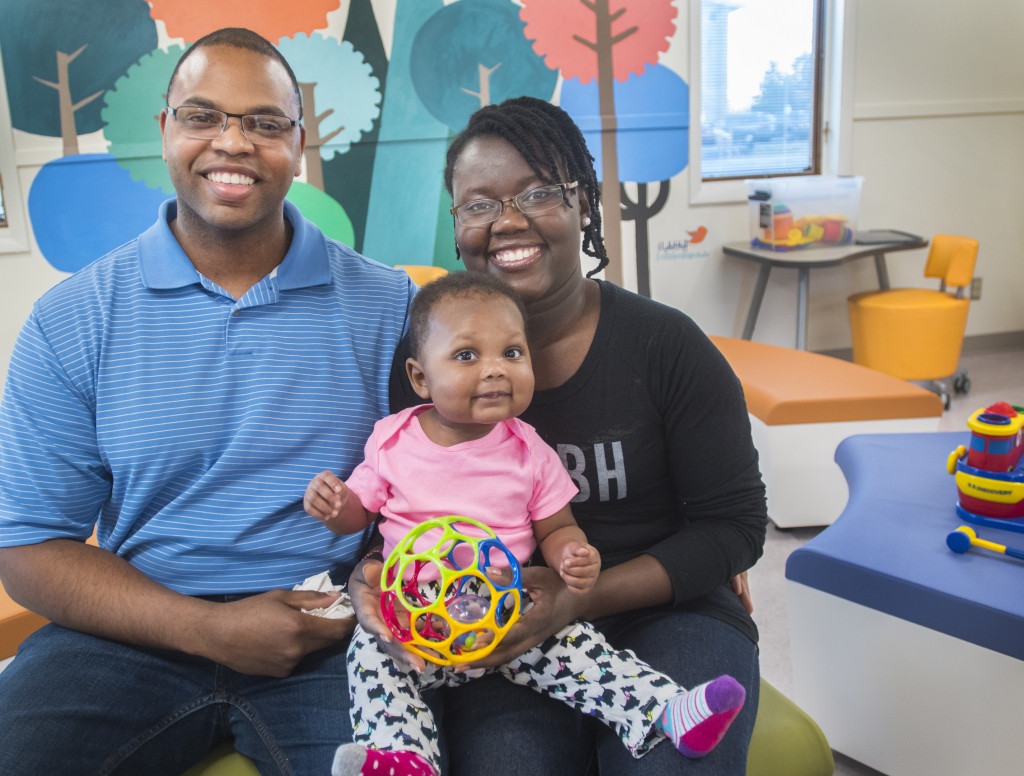 And what a journey it’s been – a bittersweet trek that began when this little tyke was just 6-weeks-old – diagnosed with a life-threatening immunodeficiency called HLH, short for Hemophagocytic Lymphohistiocytosis.

Today, at just shy of 18 months, Mistha thrives. Her parents, Julius and Widline, lean on acts of faith, and incredible collaborations that extend to medical teams, good science and, most recently, the Children’s Healing Center.

The rigors have included living nearly full time at Helen DeVos Children’s Hospital for a stay that extended to the better part of eight months. Mistha’s parents, in fact, looked at each other one day and decided that since they were spending so many consecutive nights sleeping beside their daughter on the Michigan Street hill, that it no longer made sense to keep an apartment. By saving what they’d been plowing into rent, they were able to put money down on their first home.

In the meantime, they developed a trust with the hospital and its staff, no easy task especially for Widline, who was raised in Haiti and by nature is uneasy in hospital settings.

“I used to hate hospitals,” she acknowledges, but came to lean on and embrace the men and women at DeVos, who recognized early on that Mistha’s condition merited serious attention. “They were running the tests, and after each test, the nurses would look at each other, trying to be discreet. There was a lot of movement, but not talking. She was extremely sick.

“My mind went into autopilot. My mind was so gone. It seemed so surreal. I didn’t know how to process it, how to wrap my head around it.”

“We were in shock and disbelief,” says Julius, recalling the initial visit to DeVos Children’s Hospital that he and his wife assumed would conclude with a quick checkup and prescription or two for whatever was wrong.

Instead, Mistha was admitted to intensive care for the better part of two weeks. “It was like my world had frozen,” says Widline. “Watching her little body, with so many cords, her liver failing, her blood pressure elevated…” and Widline can only finish her sentence with a flourish of tears.

Days turned to weeks turned to months. Throughout 2016, Mistha slowly gained ground, thanks in part to chemotherapy, transfusions, an experimental drug imported here from Switzerland, consults with a medical center in Ohio and, finally, a successful blood marrow transplant.

That experience – marked by arduous efforts to find a donor – underscored for both parents the need to create more awareness within minority communities of the transplant process.

“I’m working mostly with Haitian people,” says Widline, “the culture I know most about. But it’s crucial that all minorities learn more about how to get on the registry.”

As Mistha continues to make progress, she’s been attracted to the Children’s Healing Center. She bounces her way along on her knees, checking out the different options that would attract any other child nearly 2 years old.

And her parents rejoice in knowing that there’s somewhere they can take their daughter without having to worry about germs.

“I love how they go out of their way to make sure it’s clean, but also so family oriented,” says Widline.

“They’re so great at catering to people who have needs, and providing them that service.

“It’s hard to take her to a mall or even outside to play, but coming here, we don’t have to worry about a lot of things, including scrubbing my floors twice a day.

Julius isn’t shy about admitting how much he enjoyed a recent “Dad’s Night” at the CHC. “It was my first visit there,” says Julius, “and it provided a chance to have a hot dog and a soda with other fathers in similar circumstances.”

Says Widline of the Center in general: “It’s a luxury.”

Widline – who graduated Godwin High School here in 2005 and attended Grand Rapids Community College two years – met Julius while they were both employed in nutritional sales and marketing.

She’s now a stay-at-home mom, while Julius, who hails from South Haven, works fulltime at Steelcase, Inc. as a machine operator – and moonlights a bit at a local Olive Garden.

Steelcase, in fact, hosted three donor drives, and there were others as well – at the couple’s church and as far away as in Minnesota and Florida. Four times the Jacksons were heartbroken to find a match, but then learn that the donor was not willing to go through with the actual drawing of marrow.

They’re counting on brighter days ahead, though: “I’ve had my breakdowns behind closed doors,” says Widline, “but we both need to stay positive for her. We want her to be as happy as she can be.”

And that goes without saying for those of us at the CHC! 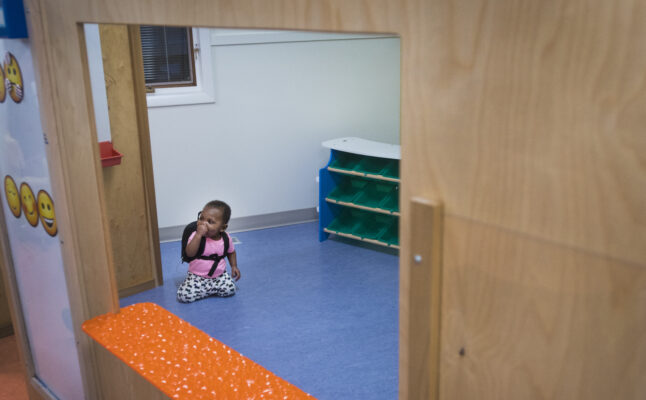 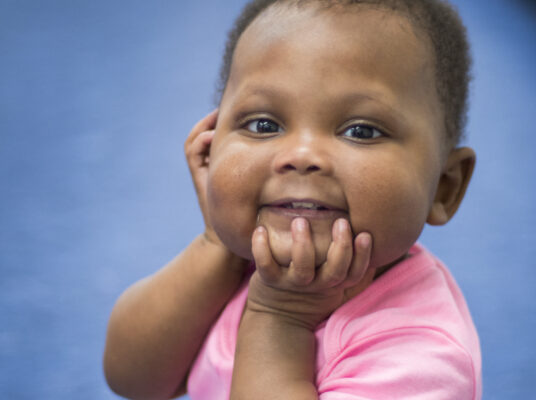 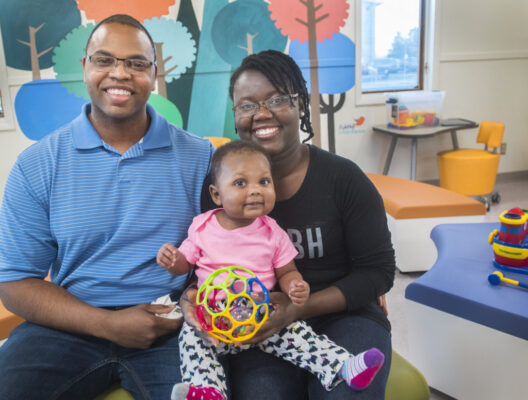 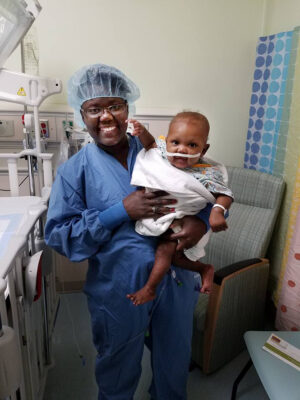 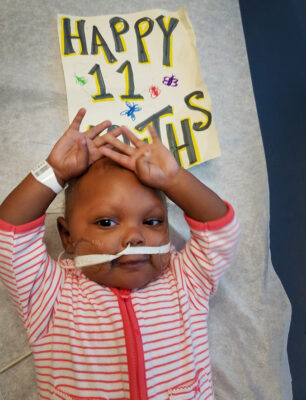 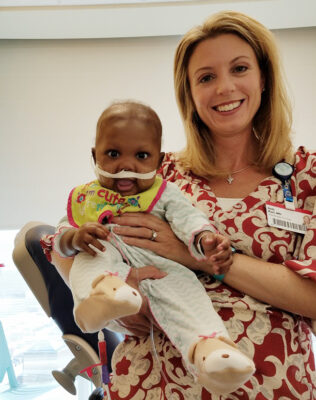 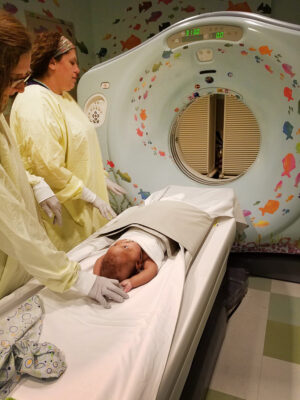 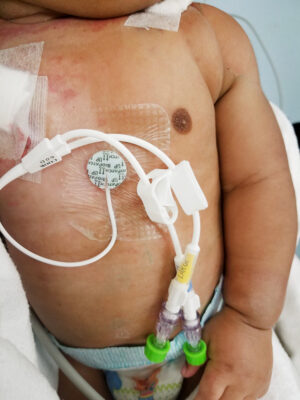 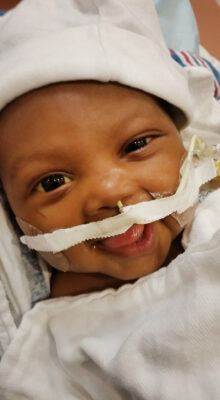